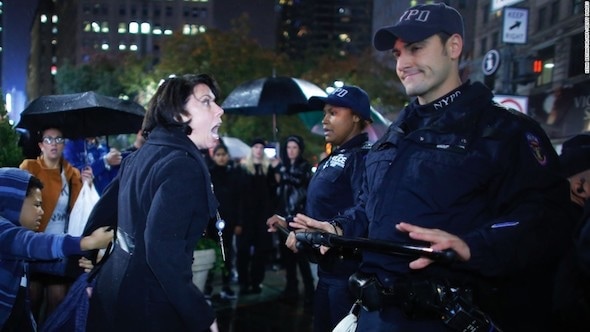 Abused and Amused
What do WE want? DEAD COPS When do WE want them? NOW!!!!” She vehemently screamed.  The skanky looking liberal was pointing directly at the old hairbag cop. He had  about 30 years on the job. He was just standing behind a police barrier only a few feet away.

“The NYPD is instructing officers to passively endure abuse from groups exercising their constitutional right to protest. Take NO action unless directed by competent authority.”

The cop decided to amuse himself by checking out the crowd that gathered on this beautiful afternoon in City Hall park.

Some of these assholes were the same professional provocateurs from the protests he worked over the years. The cop waved a recognition hello to some from the 1986 squatter self described anarchists. He remembered them from the Lower East Side before it was a trendy neighborhood. They refused to acknowledge him.

“Like I give a shit” he mumbled to himself. “So much for community policing.”

But Little Vickie, in her Che Gueverra tee shirt and black beret with the red star pin flashed the cop her toothless smile and waved. She was a 65 year old left over hippie who lived  on East 3rd Street with her boyfriend Claudio. Claudio was an aging, leftover hippie anarchist douche bag. He was not at the protest. The cop knew Claudio was bedridden with COPD. But the cop knew was there in the spirit of the revolution!

The cop was loving this was pure overtime.  His flat feet would hurt a bit, but he still thought it was worth it.

His attention finally drifted back to the young blonde tormentor, who he had tuned out for a while.

“Miss Social Warrior” kept on  viscously screaming. ”Pigs in a blanket, fry them like bacon” targeting the old hair bag cop. She moved closer and closer. She was actually getting directly into his face with even more hateful vitriol.

She probably was out to prove to her “friends of color” she was capable of exorcising her white privilege demons.

“YOU personally relish the historically systematic abuse of citizens with you acts of police brutality! "

"Do YOU enjoy harassing the people of our diverse community?”

The old hairbag cop then amazingly had an out of body experience. He was channeling Sergeant Frankie Neptune!  Sgt. Neptune was his first squad sergeant back in 1985 when the old hairbag cop was a rookie in the 9th Pct.

Sgt. Neptune  was a unique individual, to say the least.

Involuntarily and quite amazingly, the old hairbag cop yawned and smiled.  With a classic bit of Sgt. Neptune sarcasm,  he looked directly into Miss Social Warrior’s eyes  and said: