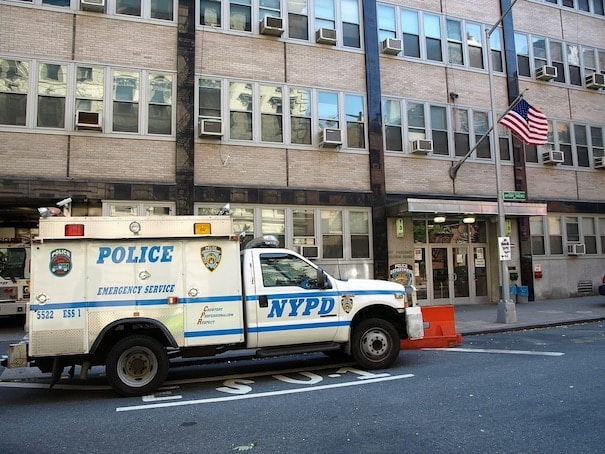 Chivalry Was Not Dead

It was a busy Manhattan summer back in 1983, a Saturday night in the NYPD’s 13th Precinct. The dense humidity soaked into the station house even though the air conditioning was running full blast: (that’s full blast for an under maintained New York City municipal building). The craziness from the streets invaded the station house as well. It seemed like every strange person within the confines of the command compiled with some exotic call. Somewhat like the zombies from The Night of the Living Dead movie. Then again, it was kind of a fun night.

There must have been a full moon.

I was assigned to Telephone/Switchboard duty. Positioned right at the inside entrance of the station house to intercept all visitors and answer the telephone. My partner was on vacation so the Lieutenant gave me the choice of either working inside or sitting on a sick prisoner at Bellevue Hospital.  No heavy gun belt, no sweaty bullet resistant vest, a simple choice - I took the station house assignment.

A few times there was a lull in the action. During the first one, a really drunk male of some Eastern European extraction about fifty years old walked in crying and begging to give himself up. In a heavy accent, he claimed he knifed a man to death on East 14th Street a few nights ago. I remember we had some nutcase in here last week who claimed he was the REAL Son of Sam, and now this guy.

I had just returned from a three day swing, and really didn’t know what had recently gone in down in the Precinct. The Lieutenant, in command, at his imposingly large and elevated  station house desk overheard the drunk. He looked down over his half glasses and said..“Frankie, get that drunken asshole out of MY station house..NOW!”

Lieutenant Timothy Frances Xavier Breen had been a cop for over thirty-five years. He was one of the few NYPD cops that still spoke with an Irish brogue. This was his job.  For example, Lieutenant Breen did not wear the mandatory and authorized holster for his unauthorized little mother of pearl .38 revolver, he kept it in his back pocket. His rules, his job. When he said something, you did it FORTHWITH!

So I threw the bum out with a swift kick in the ass.

The onslaught of strange souls picked up again. A young couple (white junkies) came in and wanted to file some kind of report. If your methadone is “lost” (they probably sold it) you report it to the cops so you can get it replaced. I guessed that’s what they were here for. I did not ask and I did not care. They were silently arguing a bit as I sent them over to the 124 Room (clerical office) to file a report with the civilian PAA clerk on duty.

Suddenly, over the din of the crowd, I heard a scream emanating from the 124 Room. The PAA just sat there and obliviously typed with one finger a report from a man who claimed someone robbed his toupee as he exited an adult book store on Lexington Avenue. I then noticed the couple I had just directed to the 124 Room - the male was choking his female companion. I dropped the phone and ran toward the commotion.

The din in the station house quickly disappeared into a silence as everyone froze and stared at the 124 Room. The Lieutenant  had jumped from behind his desk and ran into the 124 Room. He then grabbed the man and threw him down on the desk where the PAA and the toupee man were sitting. Lieutenant Breen immediately began choking him. I got there and as the man’s eyes were rolling back, I whispered to the Lieutenant, “Stop choking this guy Boss, you’re gonna kill him.”

The Lieutenant removed his hands from the man’s neck. He then straighten out his white uniform shirt and tie, pushed his grey hair back into place and looked directly at me with his steely blue eyes and quietly said; “No one chokes a woman in MY station House.” He then warned and admonished the trembling man, who I guess now agreed with the Lieutenant’s lecture on respect and proper treatment for our female population.

The couple immediately ran out the station house without filing a report. The PAA finished typing her report for the bald victim and gave him his complaint number. The Lieutenant took a break in the supervisors locker room (probably for a few cold beers).

As another lull began, the self-confessed drunk Euro-Trash murderer returned with the same story. So I figured I would play a prank on the 13th Detective squad located upstairs on the second floor. I called to tell them the murderer from East 14th Street was down here to give himself up. I told Killer to chill as I called the squad.

Before I could finish, two Detectives were down and cuffed Killer. “Thanks, Frankie, we’ve been looking for this perp” Detective Richie Vega said to me as they removed Killer to their office.

Another work of extraordinary policing from the 13th Precinct, if I do say so myself.

The pace picked up again and it continued into the next tour. I never told the Lieutenant about Killer really being the homicide perp the squad was looking for. As we walked out of the station house, the Lieutenant said to me “See, Frankie, next time that junkie thinks about harming any woman, he’ll remember it was in the 13th Pct. he learned chivalry is not dead.”