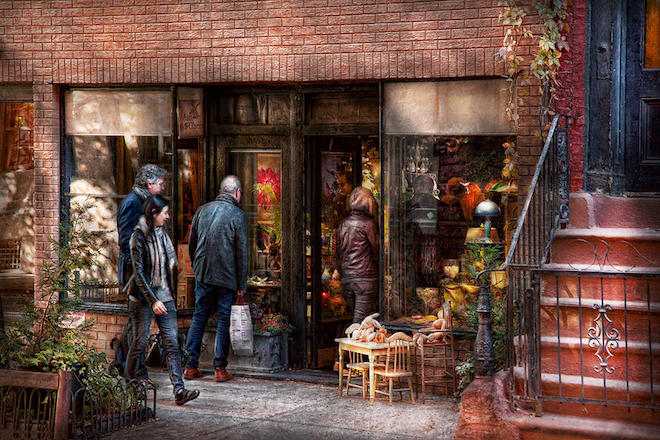 Todd Osborne was the fortyish, balding (with a small pony tail), slightly overweight, left over hippie. He was the  owner of a quaint antique/curio shop on Bleeker Street in Greenwich Village.  Todd sold all types of jewelry and a myriad of unusual items.  He was once a young midwest transplant who escaped to New York City in the late 1960’s.

In 1980, Todd and I became fast friends. He was a “Buff”(He liked the police subculture.) I met him when I walked a foot post on Bleeker Street. I’d stop in and check on him just to chat and see what was shaking in the neighborhood.  He loved to pontificate about what was going on in the world.  Todd just really enjoyed interacting with people. He was well read and an insightful critical thinker.

His significant other was Charlie O’Reilly. Charlie worked as the senior research editor for New York Magazine. Born and raised Catholic in the Bronx, he was a fit and trim forty five year old. Charlie looked like any other business person you’d pass on the street.

You’d never think of Todd and Charlie as a couple. Todd’s Hippie love beads and jeans along with Charlie’s Brooks Brothers look and Wingtips?........ Really?

Charlie was a real pisser. He especially loved off color jokes. Never politically correct,  he had a twisted New York Yiddish influenced sense of humor. It was the body language and manner by which Charlie set up and finally outrageously delivered a punch line.  That was fantastic.

I laughed so hard, I cried. Charlie had an unmatched satirical wit. Usually, Todd winced at Charlie’s crude jokes. Todd the encyclopedic and sapient self educated merchant and Charlie, the traditionally college and graduate school professional media type. I guess opposites do attract.

Todd and Charlie, two great people living their lives unfettered in the most vibrant city in the world.

My wife Nancy met me at college before I was a cop. For a girl from a small New England hamlet, she had adapted to my expanding circle of unconventional friends with enthusiasm and good humor. Nancy, a librarian with me, a photographer/communications major turned cop. Another opposites attract situation.

Many times over the years, Nancy and I had Todd and Charlie over for dinner at our Manhattan Chelsea apartment. Nancy was an excellent cook. Todd claimed Charlie was a lousy cook.  So he reciprocated by insisting on taking us to restaurants. Todd prided himself on knowing “the best new and unknown eateries” New York City had to offer. As he would say,  "before they were overrun by tourists."

One day, Todd informed me about the alarmingly increased incidents of what he called Fag Bashing. BBQ (Brooklyn, Bronx & Queens) teratoid assholes would come down to the Village in the wee weekend hours. They would  savagely beat up people (mostly transvestites). He voiced a sincere concern because the victims never called the cops. If the perps were caught, the victims did not press charges. Todd was always up on what was percolating in the neighborhood, he knew the deal.

My radio car partner Sean and I made a special effort to prevent these crimes.  When we spotted potential BBQ perps, we would appositely, escort those BBQ troglodytes out of the neighborhood. If you know what I mean.

As word spread in the command, the midnight tour cops began to look out for the tormentors of these oft targeted people. The cops went about encouraging victims to cooperate with the police and report these crimes. Most, if not all, refused to press charges. But the cops put the heat on the perps, just the same.

The trany prostitutes knew the deal. They’d get locked up when they were caught turning tricks or committing any other unlawful activity. But at least they were now less of a target.

The innocent others who were just being themselves felt a sense of relief. We didn’t let anyone hurt them. Most cops hated seeing innocents victimized.

Whoever or whatever they are.

Grass roots community policing and crime prevention at its best, thanks to Todd.

As the years rolled on, our daughter Margaret came along, Nancy and I traded our Manhattan Chelsea apartment for a house on Long Island. I was promoted to Lieutenant and assigned to the Joint Terrorism Task Force. Sean went all the way to Captain in Brooklyn and finally married to his girl Jennie. Todd and Charlie happily remained in Greenwich Village. They befriended other cops over time, but we were special to them.

They became Uncle Todd and Uncle Charlie, making it to all our family events as Margaret blossomed into a beautiful young lady. She spent weekends in the city and was exposed to the many cultural advantages afforded to her by her doting uncles. We all attended the outrageous Greenwich Village Halloween Parade every year.

Margaret loved spending one special summer.  She was staying in the city with Todd and Charlie while working an internship at New York Magazine with Charlie. She loved New York City, and still does.

They were so proud of Margaret. Todd and Charlie loved her and  she loved them. She was their princess. They attended her college graduation and both cried at her wedding.

So that’s one of my quasi-cop Stories.

Sean and I are now retired. I still keep in touch with many of the Greenwich Village people we knew. They tell me the cops nowadays are not the same as we were. The owner of “The Pink Pussy Cat” laments “there are no more 'characters' like  Sean and you anymore.” Just autotron cops taking reports. No individuality, no sense of humor.

Todd passed away from some rare form of cancer. I believe it was related to the hundreds of hours he spent on The WTC Pile as a volunteer down at Ground Zero. His shop is now a Starbucks.

Charlie retired and moved to Sarasota, Florida. Nancy and I visit him once in a while. He comes up to see us on Long Island. Margaret, her husband and their kids spend time with Charlie down there as well.

This year we’re all planning to attend the Greenwich Village Halloween parade, visit the old station house and go to Starbucks.