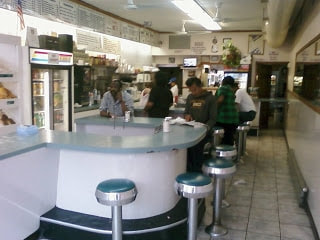 
The two NYPD cops were working a midnight tour back in 1984.


“What’s the problem now?” Frankie The Cop asks Stillos, the obnoxious owner of Athens DonutDelites. The shop was located on the southeast corner of West 23rd Street and 7th Avenue in Manhattan’s 13th Pct.


He then indigently points over to a middle aged man in a lightweight olive green summer seersucker suit.


“He falls asleep face down in his coffee and donut? Get him out of my place NOW!  My business!  My customers! Poof! They’ll be Gone!”


“OK - Stillos - Relax"  Frankie says in between a long yawn that turns into an awfully tasting burp. That from the Cheeseburger Deluxe he ate at 2 AM, against his better judgement.


“Most of the skells in this dump are in an altered state of consciousness.” Sean whispers to Frankie as they eye the skell Tyrone. He is currently stacked up over La Guardia and ain’t coming down for nobody.  He is enjoying his coffee, wherever he might be.


Stillos marches Frankie and Sean to the end of the “S” shaped counter. The section bathed under the harsh flashing neon lighted sign: "THE BEST DONUTS IN TOWN.”


Sean shakes the mans shoulder, but the man slumps further into his Boston Cream donut.


“Hey Mister, Come on, wake up!” Sean bends over and grabs the man as the man’s weight shifts and prevents the man from falling off the stool.


Then there is five seconds of dead silence. A tranny hooker lets out a loud belch, sees what’s happening and returns to her coffee and donut with no interest.


Sean looks up and whispers: “Stillos, This guy’s dead."


“Stillos, a subtle and measured response to reassure the remaining customers, even though most of them are oblivious to what's happening, is in order here,” Frankie says with his tongue firmly placed in his cheek.


Frankie further quizzes Stillos while picking up his radio to call for an ambulance.


With faux curiosity, he points to the dead man and asks: