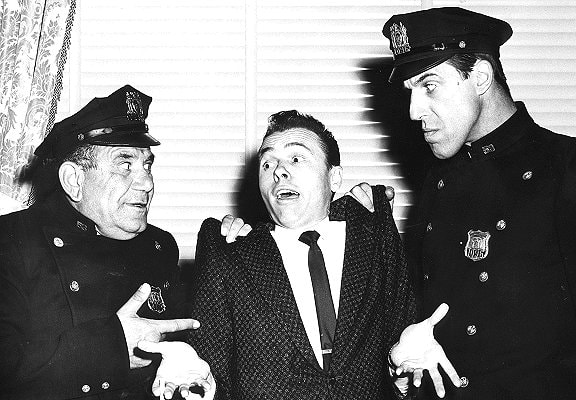 The Charm Offensive
Back in 1983, the New York City Civilian Complaint Review Board  better known as CCRB, monitored complaints against NYPD cops. At an obviously perspicuous moment their insightful minds discovered a basic algorithm. This would ultimately determine the veracity of a complaint of verbal abuse lodged against the members of the NYPD by an aggrieved and/or abused member of the public.

“All cops call people assholes, so if a complainant says he was called an asshole, it must be true.”

When Sean and I heard this piece of cogent logic we decided to counter it with an affirmative response from a working police officers’ point of view. I christened our project:

Employing the CCRB algorithm, Sean and I complied a basic list of the usual street lexicon and revised a few key phrases. We  utilized the NYPD’s own method of using key initials as well. It was expected this list would grow with input from our peers.

Another “Lowlife” (that’s us) “PPI” or “Progressive Policing Innovation.”

Shut The Fuck Up!:            “I have no interest in anything you can possibly have to say.”
*******
One day during our short lived 1983 Charm Offensive,  Sean and I encountered a friendly visitor from California. He asked us why the NYPD did not have a mission statement proudly emboldened on the RMPs. (Police Cars).

The friendly individual suggested the phrase LAPD proudly uses: “To Protect and Serve.”

Sean whispered to me, “sounds like a scum bag, protect and serve?”

I was curious to see if someone had a sense of humor down at One Police Plaza also known as “One PP,” “The Puzzle Palace,” or “Headquarters.” So, Via the NYPD’s Department Mail, I sent a UF-49 (official NYPD letter) suggestion to the NYPD Employee Suggestion Program (ESP). I was really hoping to win a coveted official NYPD coffee mug.


The content of the UF-49 had my suggestion, which was followed by our friend from California’s question. Based our our experience, most New Yorkers would probably suggest the NYPD’s Mission Statement should be: “To Antagonize and Annoy,” because most New Yorkers register a strong dislike of cops. That was my suggestion.

When you see a Fireman, he’s usually saving someone or something. Most interactions with cops are usually confrontational and unpleasant. From traffic tickets to arrests and use of physical force. The  liberal media landscape usually depicts us as evil, unlike our pals the Knights in Rubber.

When I mentioned this philosophical discourse to Sean, as usual he told me I was crazy. I once more mentioned I prefer “creative.” As usual, he hit me in my left arm with his heavy St. Joseph’s college ring to register his disapproval.

I did get a funny but short written response to my suggestion from some ESP Sergeant downtown at Headquarters. It read: “Keep up the good work, but no coffee mug for you!”

Anyway, I don’t even drink coffee.
*******
But to my surprise, Sean finally involved himself deeper in the creative process. Usually we get to fill out a UF 61 Complaint Report for a civilian. He decided to lighten things up for the civilians.  Reports involving minor crimes like stolen property, vandalism, etc. was a good time to employ his idea:

The complaint reports came bound together in five pastel colors.   Sean started to offer each victim a choice of color. It worked  because most people got a kick out of the comic relief. Some even preferred a selection of color.

See, we can be nice. We really only get nasty when someone else starts nasty. Even Sean can be nice, sometimes.

This Charm Offensive bit got old really fast with the skells. The only interesting thing was the responses. They ran from bewilderment in some to just the regular responses received from our usual method of skell communication.

Some skells who at one time had violent or nasty interactions with us became dejected and defensive. “I’m not a Thoroughly Disgusting Person.” said Rita a’la Cart, a homeless lady with three shopping carts of shit.

Our usual confrontation ended when Rita uncharacteristically and quietly moved from blocking the entrance of an ATM storefront without the usually loud argument.  The Charm Offensive worked on her.
*******
The new Commanding Officer (without telling us) put us in for a Community Service Commendation. We were shocked and surprised by his action. We’re thinking he might have been a cop like us back in his day.

It seems the Commanding Officer found out that every year, Sean and I collect old winter coats from family and friends. We get Abe the Dry Cleaner on Third Avenue to clean them (on the arm.)

Sean and I give the coats out to “our” skells living in “our” sector. It became a yearly thing with us.

Imagine “Lowlife” getting a Community Service Commendation? The  Commanding Officer probably thought this move was funny, so he went through with it.

The coat thing along with other shit made us many friends on the street. They were watching our backs. They’d call 911 if we really needed help. They kept us up to date on what was shaking in the command.  I thought it was a humanitarian, but wise move.
​
The coat thing had nothing to do with the Charm Offensive and continued after the cessation of said  Charm Offensive.
*******
The Charm Offensive ended by itself.

One cold evening we were sitting parked on East 20th street by Gramercy Park.  A non English speaking taxi  driver pulled up and the driver pointed toward his back seat.  An older man was sitting there holding is chest and looked like he was in pain.

I got out and asked him if he was OK. When he tried to answer another taxi directly behind started blowing on his horn. I couldn’t hear the sick man. I waved for the other taxi to stop honking and he gave me the finger and continued honking.

Finally, I could hear the man in the back seat. He was OK and just wanted to get home. He had severe indigestion. He lived just around the corner on Third Avenue.

Sean got out of the RMP and got the other Taxi’s documents. We got back in the RMP, and I said “This guy probably has to take a piss or whatever, don’t write him up, let him slide.”

That was the Charm Offensive talking.

The taxi driver pulls up, honks, I roll down my window, before  I can tell him to forget about it and return his credentials he yells “YOU FUCKIN’GUYS ARE ASSHOLES.”

We get out of the RMP. Needless to say this guy locks himself in his taxi, blocks traffic and finally has to be arrested. It turns into a CCRB Complaint.

A few weeks later we’re lined up for Roll Call. The new Commanding Office comes out with a paper in his hand. He comes right up to Sean and me and says, reading from the CCRB report:

“The officers grabbed, Jeffrey Steinheil, a taxi driver, out of his cab through the front driver window, banged his head against the hood of his cab while cuffing him, bounced him around the police car, kicked him, threw him down the stairs to the cell area, issued numerous summons and alleged he was a homosexual.”

I paused for a moment, turned from the Captain, looked at Sean and questionably said “I don’t remember calling him a homosexual, do you?”

Sean innocently shook his head. “No” he said with an equally non authentic look of shock.

“You fuckin’ guys,” The Captain smiled and laughed as he walked back to his office.

We climbed into RMP 1715 and discussed our dinner plans.  Sean wanted to go to Pete’s Tavern, I suggested 65 Irving. We decided to try the new French place on East 18th Street.

With that, The Charm Offensive of 1983 ended.