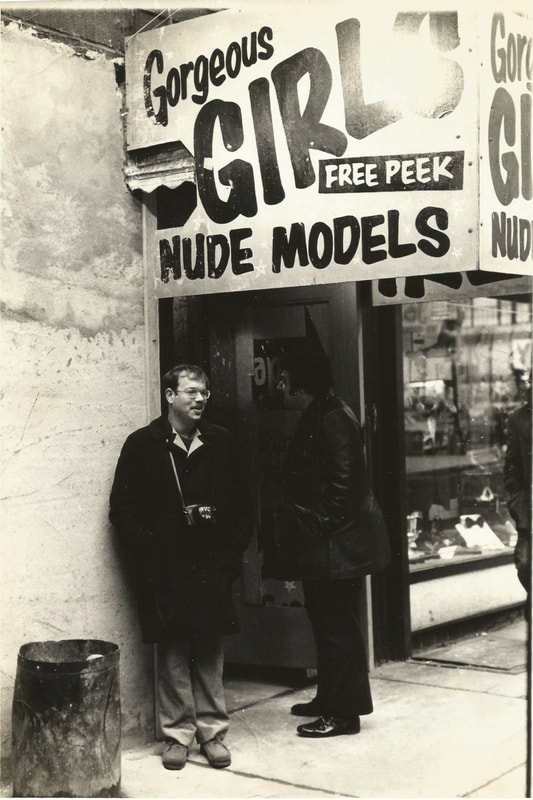 Vince Domino: King of Smut
As Tough Johnny Rolls (his words) remembers it:

It was the beginning of summer in 1954 when Vince Domino returned to the East New York section of Brooklyn. His thirteen year stretch at Sing Sing was over. No parole for Vince, he did the full tilt. He’s no rat, he kept his mouth shut.

What other choice did he have? Maybe like Kid Twist? The rat star witness who agreed to talk and took a ten story “fall” out of a window while being secretly protected by the cops at the Half Moon Hotel in Coney Island.
​
Forgetabout it!

They had Kid Twist, but they didn’t have Vince. They’d never have Vince for any Murder charge. But if they ever did, he still would not squeal. He would happily go to old sparky with honor and dignity. His mantra: “I don’t give nobody up.”

Sure, Vince, a target, avoided getting clipped by Mindy Green in the 1941 bloodletting of rat witnesses. In spite of all that, he still didn’t squeal. Luckily, his “contract work” could not be collaborated by any testifying rat from the crew or anyone else. So no Murder One charge.  That scum bag District Attorney Burton Turkus finally got Vince on some bullshit conspiracy-weapons rap. He did his time, honorably.

The new bosses didn’t give a shit. In The Can they made Vince learn to repair shoes. He was not going to do that on the outside. Vince wanted back in the game. If not contract work, any other racket would do. The new East New York bosses wouldn’t tumble. No work for Vince.

That took him to Coney Island to look up Rochelle Levy.

Vince marketed the photos, in Greenwich Village, through his NYC business contact Rudy The Queer. They were marketed as  forbidden imports from France.

Banned in Gay Parrie and now for sale in New York City!

As Vince was in the process of buying a movie camera in 1941 to expand his smut business, the Murder, Inc. shit hit the fan.  Burkus locked him up. The newspapers ran with his “sexsational” extracurricular activities. Thus the name: Vince Domino: King of Smut.

When he tracked down Rochelle, he discovered that she had married Sid Dubinsky. He was one of the cops who “fell asleep” when Kid Twist, famously fell out the tenth floor window while being secretly held at the Half Moon Hotel in 1941.

The story Dubinsky and his partner Carlo Russo gave: The Kid was probably going to pull a joke on them by swinging into the window directly below his window and coming back up the stairs. He probably planned to laughingly confront the cops in the hallway outside his securely locked door.

They claimed Kid Twist had a great sense of humor.

Turkus did not share that humorous side of the Kid.

Sid and Carlo were shit canned from the NYPD. Carlo moved to Florida and opened up a small business. Sid became a protected Coney Island bookie.

Who said crime does not pay?
Not Sid.
Not Carlo.

Sid Dubinsky met Rochelle Levy when she was singing at a Coney Island after hours club. They fell in love. Sid knew her past, but he didn’t care. She was a ripe, luscious and vivacious strawberry blonde. They were married in 1950 and settled into a cozy, but elegant, bungalow close to the beach.

On a perfectly clear, starry and salty sea breeze Coney Island evening, Vince, Rochelle and Sid met. They selected the colorfully neon lit Atlantis Bar and Grill.  Everyone knows that joint. It's located on the boardwalk down the street from Nathan's Famous hot dog stand.

They had a gigantic bar surrounded by a stage where costumed  cowboy theme singers entertained.  The people drank ice cold beer and consumed clams on the half shell.

Everyone knows that dump.  It's run by Joey Marino.

The trio traded old stories. But they quickly got down to business.

But back to East New York:

Ralphie Boy tolerated women, but he was on the down low. The guys back in 1940s East New York quietly joked about their suspicions. They were all labeling him a “bone smoker.”  Then again, Ralphie’s tough as nails “connected” brother Big Nicky didn’t want to hear about it. If he did hear anything, the guy who squawked would be seeing a dentist or checking into a hospital.

Rudy didn’t give a shit, about the photos that is.

Big Nicky got caught up in a Post Turkus sweep. He was executed  for Murder in 1945. Ralphie Boy split to Newark, New Jersey, quietly living in exile.  Without Nicky, Ralphie Boy was toast on the street. His Uncle Sally Torso asked the Newark boys to keep an eye on his nephew and provide him with a “living.”

Ralphie Boy never told anyone about the pictures and extortion. Uncle Sally just thought Ralphie Boy was a bit stunard. If he knew the truth  about Ralphie Boy he would have had his nephew clipped.

The extortion stopped when Vince was locked up. Most of Vince’s photo work was destroyed by Turkus The Crusader. No one knows why. (politics, right people, wrong place). Who knows?

Hey, if those photos ever got out, forgetaboutit!

​*******
It’s 1954: Ralphie Boy was a numbers runner in Newark. His bosses son Rocky, just got out of Sing Sing. He  asked Ralphie Boy if he knew a guy named Vince Domino.  All Ralphie Boy said was “Yea, from the old neighborhood.”  Ralphie Boy was intent on killing Vince, and killing him in a unique and embarrassing (to Vince) way.

Ralphie Boy quickly devised a plan.  Ralphie spent time searching the seedy and illegal after hours gay bars. They were housed in the truck trailers under the West Side Highway in Greenwich Village. He “accidentally” ran into Rudy the Queer. They got drunk and smoked some weed. Ralphie Boy talked Rudy into playing hide the salami at Rudy’s apartment on Bleeker Street.

The next morning, Ralphie Boy forced Rudy at gun point to call Vince and ask him (for old times sake) to attend a party at his apartment. The fugazy story was Rudy had heard about the revival of Vince's business.  Rudy wanted to discuss a possible New York University connection that would be quite beneficial. Rudy wanted to “introduce” these rich college kids to Vince. Vince said he would be there at seven.

When Vince was even more groggy and helpless, Ralph Boy posed Vince while “forcing” Rudy to perform homosexual acts on Vince. Pictures were taken using a timer so it looked like they both were in on it. Ralphie Boy made an artificial smile of ecstasy on Vince’s face as Rudy was going down on him.

When Rudy was finished, he was forced to take the same amount of pills. As he got groggy, Ralphie Boy using Rudy’s portable typewriter typed (using Vince’s finger) a suicide note stating Rudy the Queer and Vince have been lovers. They were into each other even before Vince went to  The Can. They  now they wanted to end it all because no one would accept their mutual love. In addition, they had both been unfaithful while Vince was away. They left the photos as proof of their love.

Ralphie Boy then shot Rudy in the head with his throw away  untraceable twenty-two. He used a silencer, of course. Ralphie Boy took  Rudy’s hand (again) and shot Vince the same way.

The cops in the Sixth Pct. were used to homo murder/suicides. They were only second to the “unknown foreign object stuck in anus, unable to expel” calls from St. Vincent’s Hospital.  This one story made the papers because of Vince Domino’s prior fame.

And, that, my friend, is that.

***Sid and Rochelle decided not to enter Vince’s business.

***Ralphie Boy took over Rudy’s apartment, became a weed dealer in Washington Square Park, and flamingly came out of the closet